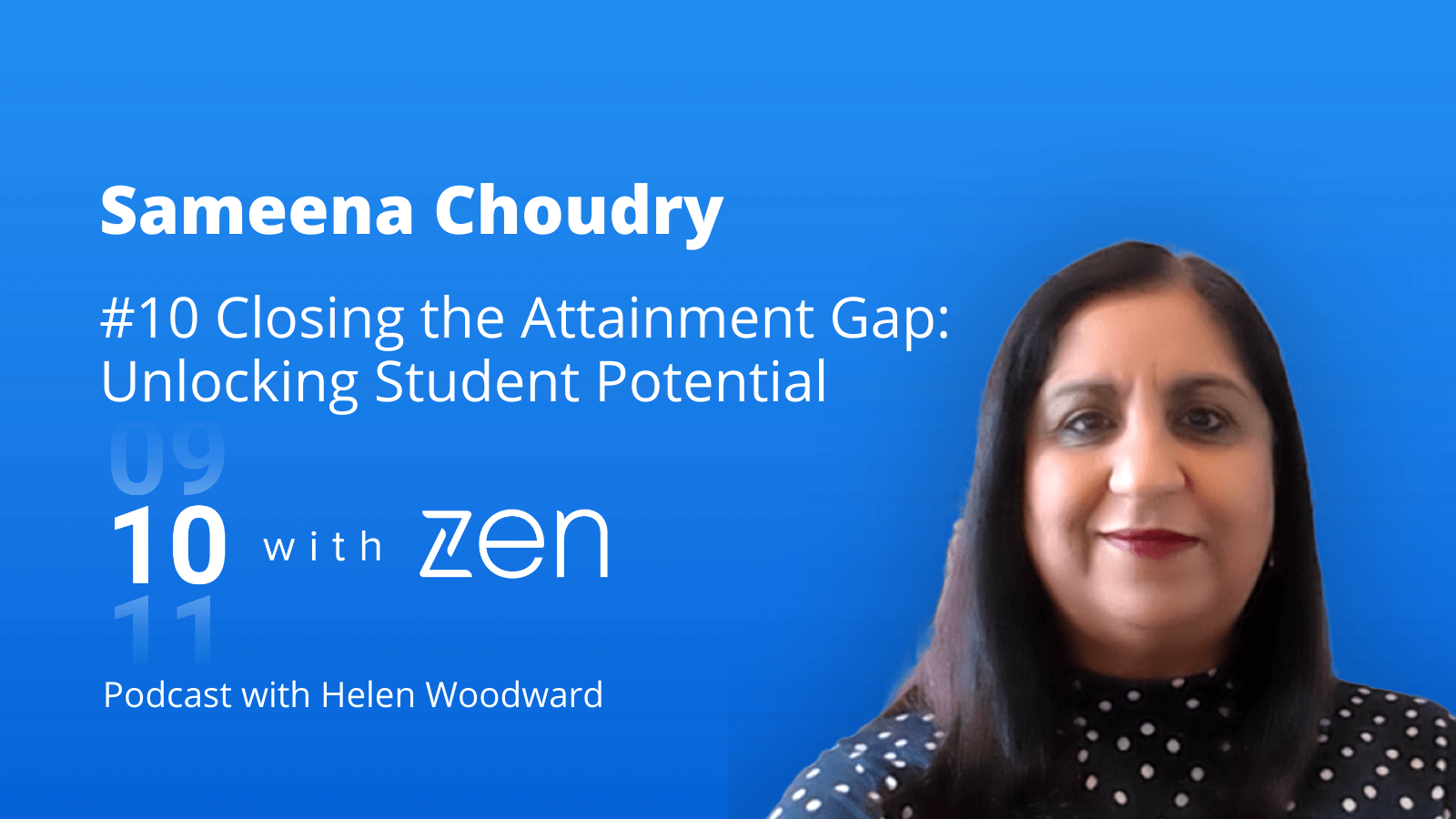 When intersectional disadvantages present complex challenges to closing the attainment gap, how can we give students the support they need? For this podcast episode, Helen Woodward talked with Sameena Choudry, founder of Equitable Education, co-founder of #WomenEd, and author of Equitable Education: What everyone working in education should know about closing the attainment gap for all pupils.

We’ve provided a transcript of the interview below, but you can watch the podcast in full right here!

Sameena Choudry: Hello Helen! Thank you for having me on your podcast today.

Helen: It’s lovely to have you. Sameena – can you tell us about Equitable Education, and the work you’re doing around closing the gaps?

Sameena: I’ve had the privilege of having a variety of roles in education and beyond, all with a focus on equity, diversity and social justice. As you’ve said, I’ve had a number of roles, and as part of that, over the 30+ years I’ve worked in education, I’ve had the privilege of working with hundreds of schools cross-phase to improve educational outcomes for pupils with specific needs who – with additionals support – can and do achieve highly. I’ve also contributed to a number of publications that have culminated in me writing Equitable Education: What everyone working in education should know about closing the attainment gap for all pupils. The common theme in all of this has been in relation to providing an equitable education for all groups of children. There are too many pupils still in our education system that are not getting the deal they should be getting. So I set up Equitable Education, a consultancy focusing on closing the attainment gap in 2013, and I’ve been really focusing on social class, gender, English as an additional language, minority ethnic achievement, Gypsy/Roma traveller pupils, refugees and asylum seekers, and Special Educational Needs, as well as leadership. At the moment, I actually work as a Learning Standards and Effectiveness Officer for a local authority.

HW: You’ve already started answering my next question, which is the particular challenge of intersectionality. So can you explain for us what this is, and the impact it can have on children’s education? And we’d love to hear some specific examples of how you’ve worked successfully with young people in these groups.

“I personally think we need to move beyond these binary definitions and understand the complexity and nuance that exists when addressing pupil needs.”

Sameena: I think in education at the moment, we have a very simplistic and crude way of defining pupil needs. So we often use the general term ‘disadvantaged pupils’ or ‘pupils eligible for free school meals’, and sadly I even hear pupils being called ‘free school meal pupils’ or ‘pupil premium pupils’. The reality on the ground is that it’s much more complex and nuanced than that, and obviously it does depend on the context of where a school is situated. The issue of diversity is likely to increase over time, so if we were to just look at it from the point of view of, say, 100 pupils, we know that 17% of those have free school meals. By the way, these figures were taken before the pandemic so it will have grown. 33% are from minority ethnic backgrounds, 1 in 5 children, or 20%, has English as an additional language, and we have about 15% that have Special Educational Needs. There are other groups of children, like Gypsy/Roma travellers and refugees and asylum seekers, that don’t really feature properly when we’re looking at their particular needs. And what we do know is that all of these groups that I’ve mentioned have higher rates of inequalities and have higher rates of eligibility for free school meals. So for example, nearly 60% of traveller children of Irish heritage have free school meals, 33% of Gypsy/Roma pupils, 28% of Caribbean – compared to overall: about 15%. And then also, if you look at Special Educational Needs pupils, when you segregate it by primary need, you can actually see that there’s higher levels of inequalities in terms of social class for pupils, for example, with Social, Emotional and Mental Health (SEMH) needs or moderate learning difficulties. So this brings us to the term ‘intersectionality’ – which was coined by professor Kimberlé Crenshaw in America – which means that you can basically look at how more than one characteristic comes together alongside social class. For example ethnicity, gender, disability, and how they culminate to have an impact on pupils’ attainment and progress in school, so I personally think we need to move beyond these binary definitions and understand the complexity and nuance that exists when addressing pupil needs. As you’ve said, COVID has really brought to the fore these existing inequalities. We know that lots of these groups have actually suffered more as a result of COVID, and what I think we need to do now is really make sure that we are addressing the specific needs of these groups of pupils to be able to address some of the existing and emerging inequalities that we have in this system.

Helen: That’s so helpful to hear it explained in that detail, and I wasn’t aware of where the term had originated from, so that’s so helpful. What kind of work is going to be successful for these children, Sameena?

“Look at what will work for your pupils, as opposed to looking at national information that you think you can just take and apply into your context.”

Sameena: I think we know from, for example the Education Endowment Foundation, what does work, and there’s a lot of evidence-based research. Obviously I would really encourage schools to look at the evidence base that’s already there. But we also know that there’s a lack of evidence base around some of these groups of pupils, and that’s one of the reasons I wrote the book, because I have spent decades researching and looking at what does work, and pulled that together. One piece of advice I would give to leaders in schools is, basically, know your community and know it really well. Then look at what will work for your pupils, as opposed to looking at national information that you think you can just take and apply into your context. There’s nothing like living a day in the life of a young person that’s in your school – really getting to know those experiences, rather than what you think are the issues in the communities that you serve.

Helen: That’s really helpful to hear: ‘know your community’ is such a powerful message. Sameena, as the co-founder of #WomenEd, which is a grassroots movement and has a huge following now, what are your hopes for the future there?

Sameena: Obviously it’s grown incredibly! When we first started off in 2015 it was a Twitter conversation and we were organising a conversation with seven like-minded women, getting together, very passionate about equality in terms of gender equality in particular. And we said that we’d sort out another conference, so we never set out to grow a movement but obviously it resonated as a big issue, and on that journey we now have about 40,000 followers and it’s grown from regional networks and an English base to UK-based, so we’ve got lots of followers and activities taking place in the UK, and it’s become an international network, showing that these issues are pertinent right across the world, as I’m sure you appreciate and I imagine a lot of your listeners will as well. But education generally is very female-dominated, but what we found was that the leadership positions aren’t always held by women. We’ve had lots of accolades, there’s been books, there’s MAs now that you can do for female cohorts. What I would want moving forward, and we have tried to build this in from day one, is ensuring that we’re actually serving the needs of all women. So I know I started off speaking about different characteristics and how we need to be more nuanced, what we do find is that if you look at disabled women, minority ethnic women, and so on, that actually they’re less likely to be in those leadership positions. So although #WomenEd has worked on that, we’re actively now making sure that they are bringing all members of the community in – older women, for example as well, making sure that they have the support. It’s also given rise to many other organisations: you’ve got BAMEed, DisabilityEd, and so on. So I just wanted to see it grow, flourish and remain a grassroots organisation, because it’s all based on supporting one another. And the best thing to hear is finding out that individuals have actually succeeded in their dream role, and been successful, so we want to see more and more women become leaders of the future. And present as well!

Helen: Absolutely Sameena, and I remember speaking at one of the first conferences back in 2015, when it was so new and so exciting, and it’s still exciting! It’s amazing to see how it’s grown and how you’ve been able to respond collectively to that need, which is wonderful. Sameena, thank you so much for being our guest today!