Whether we acknowledge it or not, hiring bias is part of our daily lives and adversely affects many more than it should. It’s common knowledge that many of our biases are implicit — we don’t realise we are acting in a biased way. What’s more, there’s evidence to suggest that attending training specifically to raise awareness of unconscious bias can even have negative effects. When it’s difficult to change our own thinking and instincts, one acknowledged way towards fairer outcomes is to design better systems for hiring.

At Zen Educate, we help thousands of teachers, teaching assistants, cover supervisors and others get out to work that suits them in both long-term and short-term supply roles. As such, we recognise we have a responsibility for promoting fair and ethical recruitment practices that supports diversity. To help with this our recent release enables all school users to anonymise teacher and TA profiles on daily supply searches and when recruiting for long-term roles. Simply hit the Anonymise toggle before making a search. 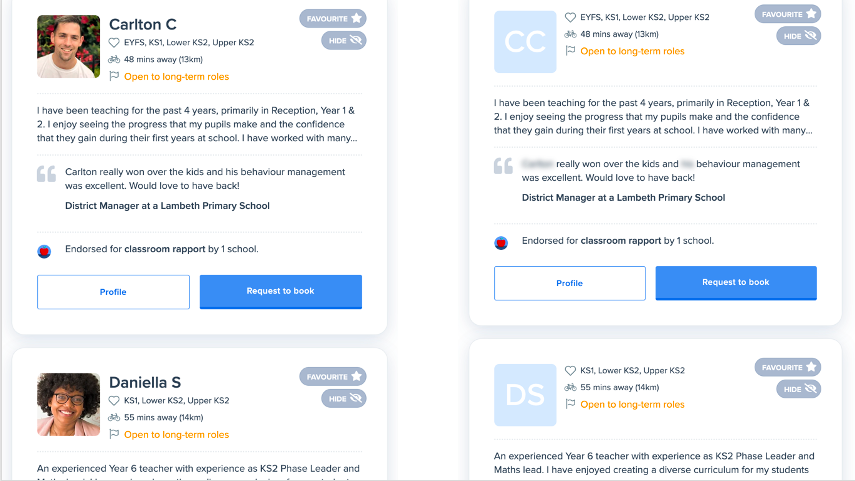 With and without Anonymise switched on

With Anonymise switched on:

Once switched on, your preference will remain for future sessions unless you turn it off.

There’s good evidence to suggest that building in systems for fairer recruitment has a significant impact. A well-known study addressed the gender imbalance in orchestras. Simple additions like a screen to hide candidates from a jury during early auditions increased the percentage of female candidates progressing to later rounds. Analyses suggest that “the transition to blind auditions from 1970s to the 1990s can explain 30 percent of the increase in the proportion of females among new hires and possibly 25 percent of the increase in the percentage of females in the orchestras.”

Another study, by the Centre for Social Investigation at Nuffield College, involved sending fake job applications for roles. The study found that it takes, on average, 60% more applications for British citizens from ethnic minority backgrounds to get positive responses from employers than the white majority group with otherwise identical CVs and cover letters.

Just as concerning, a 2009 study by the National Centre for Social Research (pdf) found that people with white sounding names were 74% more likely to receive a positive response than applications from people with an ethnic minority name.

Clearly, there’s a lot of work to be done.

We’re proud of the diversity of the 1000s of teaching professionals who we’ve helped find work and also of the Zen Educate team. The ability to anonymise profiles is a small step towards reducing bias and better hiring decisions. We’ll continue to work on ensuring that our service provides equal opportunities for as many people as possible.

If you have suggestions for more that we can do, please get in touch.